In February this year I went to New Zealand NZ) and Australia on a 7 week speaking tour in schools, Rotary Clubs and churches. While I was there I had the honour of spending time talking to the pastors who oversaw our wedding ceremony nearly 27 years ago.

Mick & Colleen Marshall were my pastors (Pete went to another church) and over the years they have served both internationally and locally. They’ve now got a brood of grandchildren and instead of retirement are looking at refirement. 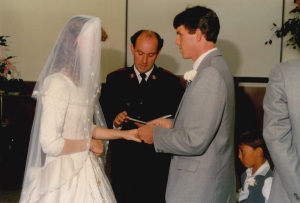 Here’s Mick leading us through our vows.

It was so special catching up with them and there were a couple of things they said to me which they were dead serious about:

Colleen and Mick this year.

I listened to them on Number One. It’s true, the world we live in Kenya is so foreign to even try and understand or explain, it’s just too much for people to hear and understand. When you talk about a traffic jam in Nairobi it is vastly different to that in Sydney. I’ve read where people in NZ complain because they have to get security checked before going into WINZ. Here, we have to avoid shopping centres because of bomb threats. Yep, it’s a bit different here.

Number Two, that’s a really hard one here. It’s not unusual to be chatting with someone overseas at 10pm, doing radio interviews at 2am or working 12 hour days, three weeks in a row. All this leads to burning out.

Here’s a definition of burnout:

Burnout is a psychological term that refers to long-term exhaustion and diminished interest in work. Burnout has been assumed to result from chronic occupational stress (e.g., work overload).

We’re not burnt out, but we did come close to it a little while back. Physically and mentally run down we took stock of where we were at and where we wanted to be.

So here’s where we’ve made some big mistakes:

In the two years we’ve been here we’ve only taken off a week. How dumb is that!! We bought Liz a camping bed for her birthday in December last year and the only time it’s been used is as a spare bed when we have visitors.

A lot of that was because we didn’t have the money. Our plan for 2015 is to take a week off every 3 months just to renew our batteries. Even if we have to camp in the middle of nowhere, leave our laptops behind and sit with the zebras, we will take a break.

We’ve lived here for 2 years and travelling here since 2007 and in all that time we’ve never been to Mombasa on the coast nor Masai Mara. Next year baby, next year.

This might be us, the tent not the motorhome.

2. Working too many weekends

There’s nothing wrong with working through a weekend if you get a day off some time during the week. However, if you end up working 3 weeks in a row, you’re setting yourself up for an emotional breakdown and big family arguments because of tiredness. We found that we were working three weekends a month. Now, we’ve got it down to two.

At the beginning of the year we thought we could take Wednesday afternoons off. It worked for a while but too many things got in the way.

It’s pretty noisy here. Anywhere from 5.30am there are people outside washing their bosses car. Also, no matter what we seem to do, there is at least one mosquito wanting to attack. Someone at the apartment above us seems to like moving furniture late at night. The best day to sleep past 5am is a Sunday – and it is most welcomed!!

Because there’s so much work to be done there’s not so much room for the odd nanny nap. I have to admit though, we’ve both fallen asleep on the sofa, there’s the Facebook photos to prove it.

Pete snapped this one from a while ago.

While we’ve made some mistakes, at least they’re all fixable. As we head into the start of our third year we expect to be working harder and at times, longer hours, we hope that if we change a few of our behaviours we will have even a better year. We’ve set some goals for where we want to head and have even planned a ’round Africa’ trip in 2018.

What about you, what ‘adjustments’ do you need to make to improve both your mental and physical health? 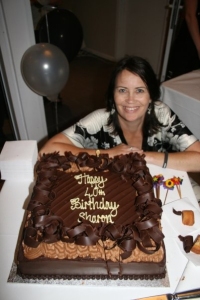 On the weekend I read a pathetic article in the local newspaper, so I just had to write about it.

Here’s a couple of short snippets of what it said:

‘Any man who throws a party or even considers some kind of bash after the age of 16 is a disgrace to the institution of masculinity. For women, we can be a bit accommodating and give them up to 25.’

‘Until adults in this country start acting more maturely, we will end up raising self-absorbed children who think the world owes them a living.’

Seriously, singing happy birthday to an adult compromises their masculinity?

I’m not sure who was more excited. 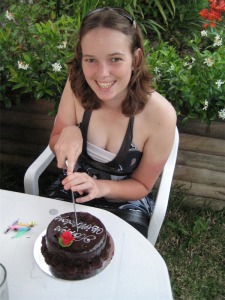 Lizzies birthday is on Dec 31st, so NYE is always important in our house.

And this is why I don’t buy newspapers very often.

I’m all for birthdays, but I guess that is how we raised our kids. Life itself is a great reason to celebrate. I’ve tried to find out if there is some deep and meaningful reason to why here in Kenya birthdays aren’t a big deal but all I could find is that it’s always been this way.

Bec and Han at a friends birthday.

In some cultures children aren’t named until they’re weaned simply because they may not survive until then. Totally understandable. Many of the kids we work with don’t know the date or year they were born because it was no big deal, until they need a birth certificate!

It’s all about the dressups.

For the last couple of years I’ve been taking birthday cake along to some of our kids programs. I figure it’s no big deal to spend $5 on cake and get them to sing happy birthday. Who doesn’t like to get a card which tells you how special you are and that you’re not a mistake? 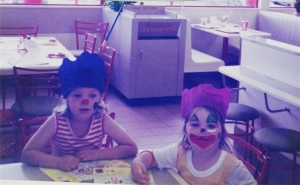 Liz and Han at Georgie Pie for a birthday.

Birthdays give us a reason to celebrate. I don’t think we celebrate the real things well. Sure, there’s huge sporting events and the Queen’s great grand-babies but nothing matters as much as our own families. With so much tragedy in the world we should celebrate more. 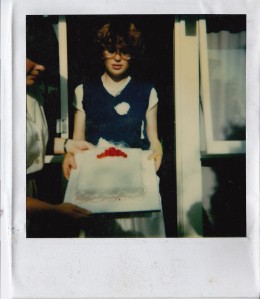 A birthday with our extended family – the Renatas.

Birthdays give a reason for families and friends to get together. I don’t know how many times I’ve heard at funerals “We should get together more” and yet we don’t. If you’re like me, you wonder where the weeks and months go, before we know it 2014 will be done and dusted.

Life is fragile and we need to handle with care. Meantime – enjoy and celebrate it!

The other day I was chatting online with a friend in Australia who mentioned I hadn’t put out a newsletter for a while (a month) and he wondered what we’d been up to.

I wonder that with all of the technology we have, if our world is becoming too busy and we’re over saturated with information 24/7.

Hey, I’m not knocking what we have, but more of how we use it. My youngest daughter and I touch base every day either via Facebook or we SMS each other for free using our iPhones. No doubt, as her wedding gets closer, it will happen more and more.

I just wonder who is in control of whom.

I admire people who go on a social media fast, I don’t think I could, well for 40 days anyway!

We get the morning world news from a pastor in a town in Aussie that I’ve never been too. It gives me a quick 5 minute overview of what’s happening. It helps me keep connected on a bigger level than just what is happening locally.

Although I hate the new Facebook Messenger, we get no choice but to use it. The power goes out often and sometimes for a very long time. However, because it’s so cheap to have the internet on your phone, it enables me to use it even if the power is off (unless my phone battery dies of course!). $5 of credit gives me access to the internet for a whole month.

We’ve been based in Kenya for close to 2 years, and I have to say that out of all my years of travelling here, technology has helped to transform this country in a very short time. Twenty years ago to make an overseas call you would have to let the person know by post on what date and time you would call, go book it in and hope it would work.

Now we simply Facetime or Skype and get grumpy when the internet is slow.

Somehow, I don’t think we can live without all of what we have anymore – unless it’s forced upon us. We had a Canadian couple visit us, who are farmers in a remote part of Ethiopia. They reminded us how lucky we were to have everything at our fingertips.

So where have I actually been lately – writing blogs, videoing kids, editing photos, uploading to Instagram, you know – trying to keep up communicating with the masses.