In another week, most people around the world will be celebrating Christmas. Some will be with friends, others with family and way too many people will spend the day alone. Probably for most it will be about Santa and gifts, for some it’s the time to remember the birth of Jesus Christ.

There’s always competition on who can have the best lighting show on their house and the most impressive gift given.

We have some traditions for Christmas. The tree goes up on the 1st December, followed by the lights. Each year we each go out and choose a decoration for the tree. Sometimes we’re in different countries so it’s nice as a memory of our travels.

This year we will be in Kenya for Christmas. We were here last year too but we were actually meant to be in South Africa. That all fell through at the last minute and so we felt a little lost being in Nairobi. All of our friends had gone away, both local and expat. Nairobi pretty much empties out as this is one of the few times people will travel to go and see their families. We knew we would be here this year so planned for it well.

However, the other day I was looking at the tree that Lizzie put up and really missed seeing the candy canes. I’ve never seen them in Kenya and although there is a lot more Christmassy stuff this year, not a candy cane in sight. We went to church on Sunday and there wasn’t even a Christmas tree up. The only decorations was a small wreath and a couple of red baubles. While there was a lot of people saying ‘Merry Christmas’ it didn’t quite have that feel.

Last weekend we took some friends to Thika Road Mall. TRM has the best decorations in the whole of the city. It’s quite marvelous and has such a Christmassy feel about it. There’s nothing like glitz and glamour to walk through. 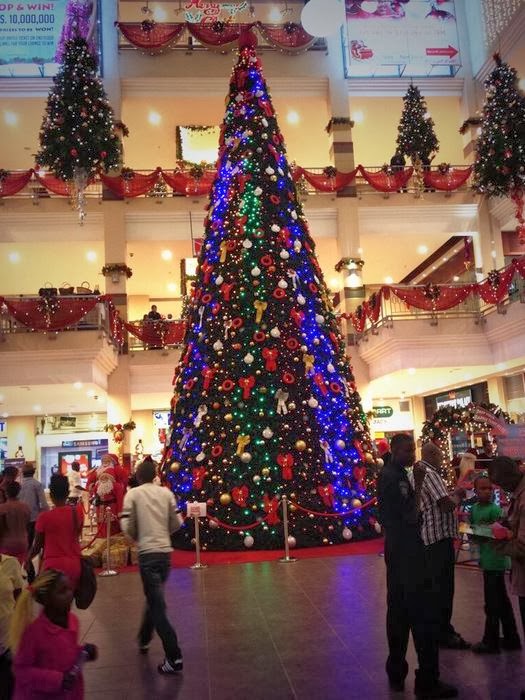 When we lived in Australia it was often around 30 degrees and our days were spent at the beach having fish and chips. Now we live in Kenya with similar weather conditions but the beach for us is a 9 hour drive away. We brought all of our tree decorations with us from Australia and in 2012 we purchased a fake tree which has kept us going.

We have had to purposely make Christmas a great thing here. This year we decided that it would be no presents, but we would go camping instead. We made up 5 food parcels for people who needed them. We bought some Christmas crackers to take away with us. Every now and then Chrissy music plays through our house.

What we have is limited compared to how we would do things when we have greater family around. While it would be really cool to have candy canes, I think we can do without them. We’ve made a decision to make the most of it even if we don’t have much.

The one thing I have learned from living in Africa is that it’s not about the trimmings or gifts, it’s about getting together with family and giving kids what they so desperately want and need – TIME.