I’ve read about it, but experiencing it is quite different. I haven’t lived in New Zealand for 12 years and Australia for 16 months. We’re on assignment in Kenya (East Africa) and this visit was to make connections and raise much needed funds to keep us in Nairobi.

Firstly of course is the reverse culture shock – where you return to your home of previous residence. The only chance on our 4 flight trip to exit an airport was in Singapore where we went to my cousins for the day. I’d never been to Singapore so everything was very cool until I spotted a sign that said ‘Be considerate of other drivers and indicate’. I just started laughing in the back seat, I’m not quite sure if it was the 2 sleepless days catching up with me or the thought that this would NEVER happen in Kenya. When we arrived in Sydney there was the increase in early morning train rides that were a shocker and where you felt like an idiot for not knowing. One of the things that really bugged me was the lack of free wireless on offer at the malls. Every mall in Nairobi has some form of free wifi. Because labour is so cheap, toilets at the airport and malls leave for dead the quality of toilets in Aussie. I was so disgusted with Sydney airport toilets but I did appreciate those hand driers that are supersonic and dry your hands with just one pass in the drier.

Liz boarding. The bonus of NOT being 9hrs from the nearest beach.

The biggest sense is that of not belonging. I miss the familiarity of Nairobi and how Kenya works. Sydney is definitely not home anymore. Partly because Pete isn’t there and partly because we have moved on. Liz and I even went to a leaders meeting at our local church and my thought was ‘It’s great here but man would we be bored if we returned’. While it was great seeing friends and family, I also have friends and family in Kenya.

We were only in Sydney for just under 2 days to fly to NZ for a family reunion and then kick off a 6 week speaking tour. The last time I was at a family reunion I was 8 and our family lived about 4 hours away so we didn’t see the others very often anyway. So here’s this bunch of total strangers spending a weekend together at a remote beach that only those 60+ really have memories of. The rest of us sort of knew each other but it was just a matter of who are you, whose your parent and what have you been up to for the last 36 years? The saddest thing about choosing to live overseas is the lack of connection with family. There’s no holidays together, no shared memories. It doesn’t sound much, but it is quite a huge thing. 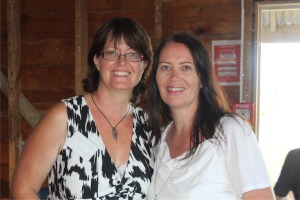 Downside of 8 weeks on the road – wild hair.

In Kenya, customer service is a top priority but obviously not here. A taxi driver said about our one suitcase “I’m not lifting that into the car by myself”, hmm, don’t become a cab driver then!

I keep reminding myself that it is just different and we are not here forever. It’s not all bad. Family go out of their way to make you feel welcome. People are interested in your story and so far the weather has been good.

It’s early days yet but I think this trip will be worth it. I hold my breath and hope that we raise the necessary funds because we really do want to stay in Nairobi and work with the most amazing young people on the planet.

With 5 days out before we started out 52 journey home I remembered I didn’t have a visa for our 15 hour stay in Mumbai, India. Great for someone who has put together a 7 week itinerary through a few countries, schools, churches, clubs and business meetings – I totally forgot  about this.

No worries, after a couple of phone calls and checking out the website which stated that a transit visa could be done in one day and only $27 each. It’s kind of weird, India just announced that you can finally get a visa at the airport, just not a transit one. Liz has travelled through Mumbai airport a few times, me I haven’t been there for over 20 years. Most people say to stay clear of this airport but we had no choice. BeyondWater generously paid for my ticket but Liz was a different story. She has to be back in Aussie anyway as part of her pension agreement and she had no spare money.

So the trip has ended up Nairobi to Dubai, to Mumbai, to Singapore to Sydney. Sure it is painfully long but cut the price down by $1,000, so it will be worth it.

I convinced Joy, one of my co-workers to take Liz and I into town on a matatu as he was taking the car out to the farm. His motorbike won’t be ready for a few more days. Joy says she will be at our place the next morning at 6.30am, as she says, it’s better to be there early than to wait forever, and you never know what the traffic will be like.

First though we had to get new passport photos as the India visa requires a different size. Pete’s out late working so we walk up to the mall (only 15 minutes) and get our new photos at a price of $10. They look good, but we also had some normal size ones sitting in our draw at home.

Joy arrives on time as promised. She had to convince her parents that she wasn’t chucking a sickie from work and walks a distance to our apartment. Pete drops us off at Lavington, a 10 minute drive away and we manage to get straight into a matatu, which is rare. It’s normal practise to wait until the matatu fills up before it leaves and we filled the last seats. 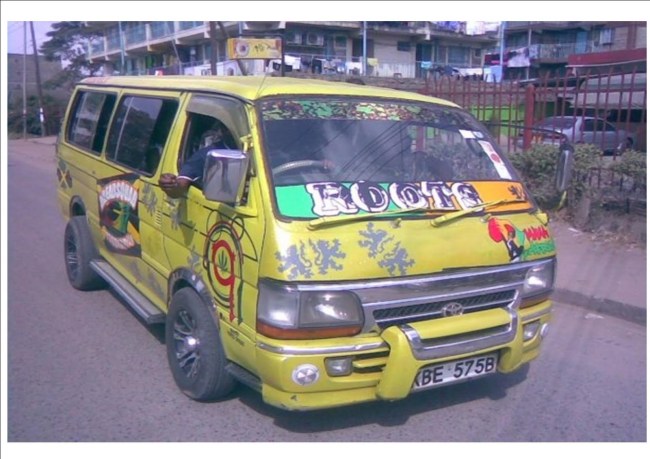 Now this is not a nice flash new 10 seater van. This is a beatup looking thing with Kenny Rogers and Lionel Richie blaring out over the speakers. The great thing about catching a matatu is that they go where no one else dares and at a speed that is crazy for around here. If I were to drive not only would the parking be a nightmare, it would take 2 hours in the morning. We were moving along nicely until all of a sudden the traffic came to a standstill. This didn’t deter our thrifty driver, he swerved to the right and headed on the wrong side of the road, side swiping a cyclist with a passenger (they were fine) and he headed to the front of the line. While there is an insane driver there is also the conductor who collects the money (50 cents for a one way ride). He may or may not have a seat and when someone wants to get off he whacks the side of the van to tell the driver to pull over. He is also happy to yell out the one window that work ‘’Town, town’ in case someone needs a lift.

All is well until we near the CBD where we don’t move for 20 minutes. We decide to walk, a much better option. As soon as we get out a drunk elderly man walks past Liz and says ‘Nice hat’ – she wasn’t wearing one.

Right on 8.30 we get to a building that a security officer says is the high commission office. No signs, just another guard who tells us to leave our bag at the entrance. As in every other public place the security wand is waved over us. We proceed to a room that looks like an ancient library. Still no signs, no staff, just a couple of people who tell us that the line is the seating. So we sit for an hour. Slowly the crowd builds up, but no staff.

A view of the Nairobi CBD

Dead on 9.30am a man walks in with his stamp, get’s it on the correct date and yells ‘next’. That my friend is but step one in the process. This nice gentleman says to go to the opposite room (no signs yet) where we take a seat. Our number (3) is called. The lady goes through the stamped papers and tells us we need to see her manager – the man seated next to her. We return to our seats to see the manager telling a woman that he ‘won’t process her visa and why did she leave it till now to get it’. No worries I thought, we’ve called, checked out the website. Liz and I approach the desk. He asks if these are the tickets (they say they are), we give all the forms. He knows what date we fly out, he knows we need a transit visa. He brings out another form which we duly fill in. He gets out his receipt book and starts with adding about another $15 to the fee.

At this point, I ask again for the umpteenth time ‘So, we will get a visa by the time we fly out on Friday’. He stops, puts his pen down and asks what time our flight is. His simple answer is ‘No, it won’t happen’. No, you can pay more and get it done faster, no reason why, just that he won’t do it. He’s the manager and it was his choice.

Stuff it I think to myself. How many times do you have to ask about time frames, will something get done, is it possible? I’m not asking to be in the country forever, just 15 hours.

‘I will have to withdraw my application’ I say. No reaction from him except ‘That’s your choice’.

So after a drink we catch an even more dodgy matatu back to work. Liz, she loses her phone.