In February this year I went to New Zealand NZ) and Australia on a 7 week speaking tour in schools, Rotary Clubs and churches. While I was there I had the honour of spending time talking to the pastors who oversaw our wedding ceremony nearly 27 years ago.

Mick & Colleen Marshall were my pastors (Pete went to another church) and over the years they have served both internationally and locally. They’ve now got a brood of grandchildren and instead of retirement are looking at refirement.

Here’s Mick leading us through our vows.

It was so special catching up with them and there were a couple of things they said to me which they were dead serious about: 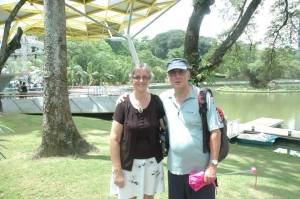 Colleen and Mick this year.

I listened to them on Number One. It’s true, the world we live in Kenya is so foreign to even try and understand or explain, it’s just too much for people to hear and understand. When you talk about a traffic jam in Nairobi it is vastly different to that in Sydney. I’ve read where people in NZ complain because they have to get security checked before going into WINZ. Here, we have to avoid shopping centres because of bomb threats. Yep, it’s a bit different here.

Number Two, that’s a really hard one here. It’s not unusual to be chatting with someone overseas at 10pm, doing radio interviews at 2am or working 12 hour days, three weeks in a row. All this leads to burning out.

Here’s a definition of burnout:

Burnout is a psychological term that refers to long-term exhaustion and diminished interest in work. Burnout has been assumed to result from chronic occupational stress (e.g., work overload).

We’re not burnt out, but we did come close to it a little while back. Physically and mentally run down we took stock of where we were at and where we wanted to be.

So here’s where we’ve made some big mistakes:

In the two years we’ve been here we’ve only taken off a week. How dumb is that!! We bought Liz a camping bed for her birthday in December last year and the only time it’s been used is as a spare bed when we have visitors.

A lot of that was because we didn’t have the money. Our plan for 2015 is to take a week off every 3 months just to renew our batteries. Even if we have to camp in the middle of nowhere, leave our laptops behind and sit with the zebras, we will take a break.

We’ve lived here for 2 years and travelling here since 2007 and in all that time we’ve never been to Mombasa on the coast nor Masai Mara. Next year baby, next year.

This might be us, the tent not the motorhome.

2. Working too many weekends

There’s nothing wrong with working through a weekend if you get a day off some time during the week. However, if you end up working 3 weeks in a row, you’re setting yourself up for an emotional breakdown and big family arguments because of tiredness. We found that we were working three weekends a month. Now, we’ve got it down to two.

At the beginning of the year we thought we could take Wednesday afternoons off. It worked for a while but too many things got in the way.

It’s pretty noisy here. Anywhere from 5.30am there are people outside washing their bosses car. Also, no matter what we seem to do, there is at least one mosquito wanting to attack. Someone at the apartment above us seems to like moving furniture late at night. The best day to sleep past 5am is a Sunday – and it is most welcomed!!

Because there’s so much work to be done there’s not so much room for the odd nanny nap. I have to admit though, we’ve both fallen asleep on the sofa, there’s the Facebook photos to prove it.

Pete snapped this one from a while ago.

While we’ve made some mistakes, at least they’re all fixable. As we head into the start of our third year we expect to be working harder and at times, longer hours, we hope that if we change a few of our behaviours we will have even a better year. We’ve set some goals for where we want to head and have even planned a ’round Africa’ trip in 2018.

What about you, what ‘adjustments’ do you need to make to improve both your mental and physical health?