Yesterday we joined 85,000 people running in the City2Surf. Actually we didn’t run, Pete and I waited for our team of 6 to get past the finish line with food and goodies to help them recuperate. It was well below 10 degrees and there was a howling onshore wind. When I say howling, I meant screaming.

We had all of our gear on that we wore up Mt Kilimanjaro and we were still cold. That wind was wicked.

We had 2 jobs, one to find the crew (no phones work there) and the other was to cheer them on if we saw them running. Well, no one turned up at the assigned spot, probably because as soon as they finished they jumped on the buses to go somewhere warmer. But one of us couldn’t leave just in case someone did arrive. In the end Pete stood around talking with people about our work in Africa.

I couldn’t stand the wind coming off the ocean so decided to wait it out at the finish line seeing if I could spot any of our guys. Some came in at 65 minutes, the last at 2 hours. It was a very long morning.
It did get me thinking about the people who are committing to support us while we work in Kenya this coming year. It aligned a lot with what I experienced yesterday. 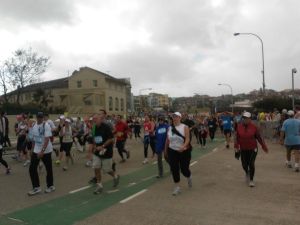 All we knew was the team was starting at a few different times and were making their way to Bondi Beach.

People sort of understand what we’re going to be doing in Kenya but no matter how much we explain it, until you go there, you don’t really get it.

2. Sometimes technology lets you down.

Mobile phones generally didn’t work at Bondi Beach, there were way too many people.

In Kenya the power will go off when it feels like it or will be incredibly slow. This may mean a delay in us getting back to people. We’re lucky though. We know some people in Mozambique who’ve only just got the internet!

3. At some stage someone has to pay to help someone else to make it.

We got out of bed really early, travelled over an hour to get to a place that was freezing for no one else to turn up. That was after going out to buy all the food that no one came to eat.

People who partner with us are actually putting a meal on our table and a roof over our head. It’s very humbling to know your reliance is on other people who are giving up their personal money for you.

4. There’s real joy in knowing they’ve reached their goal and you were a part of it.

It was great to be able to message and talk with some of our team who ran in the race. Their times were outstanding and I am always amazed and how we can push our bodies. I was super elated to be able to watch our daughter Lizzie get to the finish line and cheer her on.

When supporters hear about our work they know it’s happening because of them. Some look at their donation as a very small part but to us it’s huge. Any prayer, kind thought or encouraging word goes a long way. 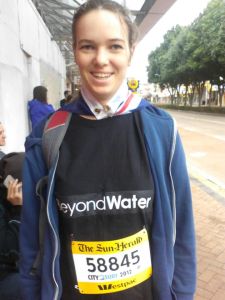 5. It’s nice to get home and enjoy your life.

Pete decided that it would be a good idea to walk the 26km’s back home as part of our training to climb Mt Kilimanjaro again, just like we did last year. We made it to the city which is about 10km’s and then called it quits. We were tired. It was so nice to come home to eat food and watch a DVD.

I’ve always told people that they should never apologise for their TV, living conditions, number of cars or the house they live in. Everyone works extremely hard and if you live in Sydney, you live in one of the most expensive cities in the world. Battling poverty at a grass roots level is not everyone’s cup of tea, but it’s ours. So enjoy your life, it’s the only one you’re going to get!