Actually it wasn’t Kisumu but Seme about an hour out of the city. The 8 hour drive was great until we got lost, in the dark, and the directions we had didn’t match what we could see. Then it became a 10 hour trip.

Seme (sem – aye) is right on the edge of Lake Victoria. It’s a very small village, up a long dirt road. Think of close to Uganda, just below the Equator and that’s where we were. It’s in the Nyanza District. 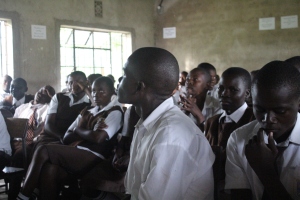 These students are in school for 11 hours each day. We got to spend an hour with them.

We were visiting some new friends who are helping with our visa requirements and are also putting up a childrens home. Pete has a wealth of knowledge when it comes to practical things but especially putting up buildings. Many people lose money in construction here because of dodgy builders who do a half decent job and never return. 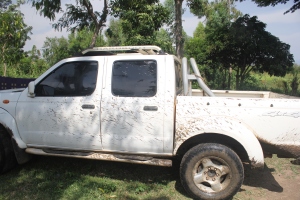 How we got around Seme

While the weather in Seme was warm (29 degrees) we had to pass through rain and hail storms to get there. In fact we missed the turnoff from Kericho to Kisumu because we just couldn’t see anything, way too much hail.

From visits to other places I expected our hosts to live in a very small one bedroom house. Instead they had built a beautiful 3 bedroom, two storied place. On the second floor was an open walled meeting area which looked out over the lake. It was lovely. 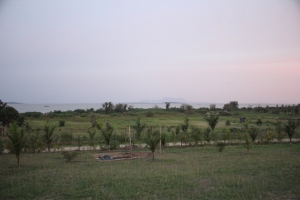 The view from upstairs

Because we got there so late we slept in the house that night and pitched the tent the next morning. The weekend was full on with visiting families, filming for BeyondWater, giving out a health pack to a soon-to-be mother, playing games with the kids at church and even a community consultation forum. In between Pete was able to peg out the building on the land. 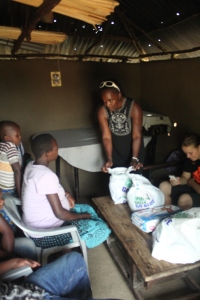 Lindah, our host, showing a soon to be mum how to use the things we had bought her.

Sleeping in a tent is great. That is until your blow up bed unexpectantly goes down in the wee hours of the morning. And it’s not so great to discover that you’ve pitched the tent right next to the chicken coop where a rooster starts crowing at 4am. I can do without running water and electricity but a rooster…. He was lucky not to become dinner.

However, having a fire burning and everyone sitting around it having a good time is priceless. Last year we bought a bunch of fireworks but never lit them off in case the neighbours thought it was gunfire. So we took them to Seme and within 10 minutes they were all gone. I don’t know whether they just aren’t as good or when you’re small everything is bigger and better, but fireworks just aren’t as good as they used to be. 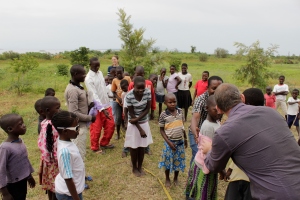 At least in the country you can see the stars. There’s too many lights in the city. It’s quite noisy at night as the sound travels a really long way, especially when a lake is involved. It seemed someone up the road liked to party every night. In truth, it was probably miles away, but it still went all night. Of course, when it’s dark, it’s really dark. Our wonderful hosts are trying to organize solar power to their house because the electricity provider is making it impossible for the average person to afford to get it connected. We brought with us 3 small solar lamps which lit up their house (and our tent) wonderfully. Apparently since we left, they’ve invested into one and the kids love it. 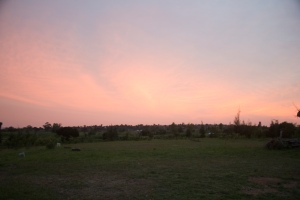 The camera doesn’t do justice to the sunsets we saw.

One thing I really noticed in Seme is that there’s this massive lake (Victoria) and it’s the only water supply for the area. It’s also very unclean. People bath in it, pollution comes from Kisumu onto the shores, it’s for drinking by humans and animals and for washing your clothes. 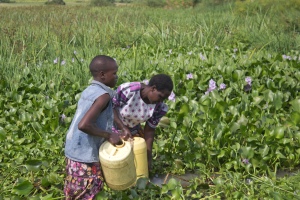 Lake Victoria is the biggest in Africa and it’s the largest tropical lake in the world. However, the people living around it have so many waterborne diseases. Thankfully our friends had a really good water filter. 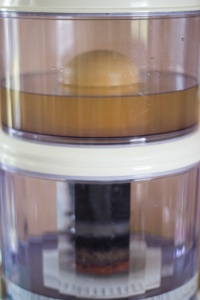 When you live in this area you need a filter like this one.

Lack of clean water, no electricity, slow internet. If you’re fussy about any of these things, don’t go camping and don’t go to remote areas. When you’re there you find instead wonderful, hospitable people, young people hungry to learn, little children who love to laugh and communities who do it tough, but always with a smile. 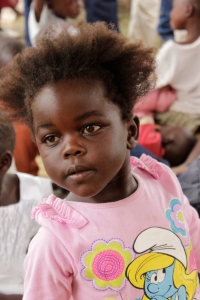 With a face like this, why wouldn’t you want to come back.

Our friends thought we had really gone bush by tenting at their place. We felt honoured and spoilt by everyone and can’t wait to return.