Every September in Nairobi the International Trade Fair (otherwise known as ‘the show’) is held at the showgrounds. During the rest of the year it looks like an abandoned village but for one week, the place comes alive.

Some of the crowd

Nothing spoils you more than living in Australia and going to the East Show, it is fantastic and nothing compares with it. But in reality, the Trade Fair is quite amazing for Kenya standards.

Olwen, Pete, me and Gary

Our routine for the past two times we’ve gone, is to meet up with our Canadian friend Gary. Gary is awesomely funny. He and his beautiful wife Cynthia moved here for a couple of years. She works for IBM, Gary plays golf (and other fun retiree stuff). Cynthia is a wonderful breath of fresh air, hanging around with her revitalises you.

Gary and his new friend

They have a car and driver as part of their package to be here so we’ve got the show down to a good habit. We drive to the local mall and leave our car there. Gary picks us up and his driver takes us to the showground then drops us back off afterwards. Next year we’ll have to park at the show as they would’ve returned to Canada.

This year was different in that we went on a Friday. Wednesdays are out because the President of Kenya comes and you can’t get around the place. 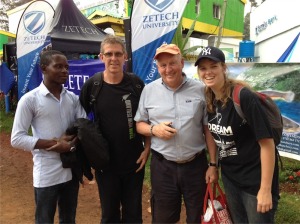 Most of the team

We haven’t had very much rain this year, but it decided to bucket down during the night. Hence, we bought an umbrella, which was used for all of 30 seconds before it dried up in the morning.

Looking at one of the vege patches

The show is always jam packed with school kids, farmers, hoards of animals on display, horse jumping, expo sites and eateries. There’s judging of the best animals and businesses spruiking their wares. It’s never a dull moment and if you want somewhere quiet, you won’t find it here.

It’s quite good value, only $3 to get in and if you really want to splurge, around 20 cents for a ride. Last year we found this food hall where you can get ¼ chicken, chips and a coke for $4.

Pete especially likes the show because he gets to see everything he needs for farming in one place. Nairobi is tricky to get around because of the congested traffic so if you get two things done in one day, you’re winning.

All year Gary has been onto Liz about going on a camel ride. She had psyched herself up for it and she was glad it had been raining because who wants to ride on a wet camel?

What we saw a lot of this year were people dressed up in crazy character outfits. Gary was in his element. 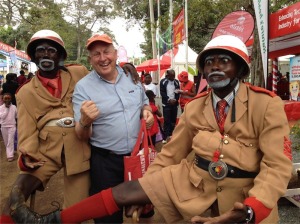 We also had Olwen, one of Pete’s work colleagues join us for a few hours. He’s a great young man who is working his first agricultural job since graduating from uni. There was no way on God’s green earth he was getting onto a camel and was also glad it had been raining. 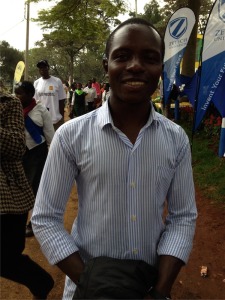 One of the weirdest things I saw on our way out was a Witness Protection Agency tent. Not your average expo site and I didn’t go in because I thought they couldn’t say much to protect whoever was in hiding. Hopefully we’ll never need their services!

Witness protection at your service

Overall it was a great day and although we won’t get to do it with Gary again, it has built some memorable moments.

Terri (AKA Tee) is one of our many ‘extra’ kids we have in our family. We’ve known her since she was 4 years old, she is now 25. It was only a few weeks ago that she said she was coming here for 3 weeks, so we adjusted our calendar, planned some outings and finally got our guest room ready. 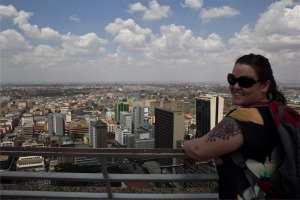 Looking out at Nairobi from the Convention Centre

Until then the guest room was empty and we had always planned to furnish it, but didn’t have the funds for it. Just after we got the message that Tee was coming some New Zealand and Aussie friends gave us enough for a mattress and bed. When she arrived, another friend gave us the funds for some bedside tables. So now all we need is a BBQ, vacuum cleaner, solar backup and we are pretty much set up!

The great things about having visitors is that I get a chance to get out of the office. Not that I mind working with our team (they are the best) but endlessly looking at a computer screen gets just a bit much. So I’ve abandoned our team for the 3 weeks that Tee is here, keeping in touch online and going in only on Monday mornings. It means working at nights or sneaking in time like now when she is getting her hair braided – Kenyan style. We absolutely love having visitors and showing them that Africa is more than war, famine and poverty.

This is how you kiss a giraffe

I always get amazed by what peoples reactions are to Kenya and everything it holds. Most are intrigued that we pretty much have all the modern amenities, that we drive in crazy traffic and don’t have a heart attack and how good the food is. I feel sorry for Tee because I told her that the weather had been cool, but by the time she got here it was quite warm. She came from 15 degrees in New Zealand to 25 – 27 degree heat. The other day I suggested we walk the 15 minutes to the mall – bad mistake. She has constantly reminded me and anyone we meet about how she nearly melted. Won’t be doing that one again.

Preschoolers in the Kitui District

The thing I love about Tee is her laugh it’s infectious. This is especially so when we’ve driven for hours and start quoting movies, Swahili practise and songs to suit the situation. That’s when we know we’re all tired and Tee’s laughs keep us going. She was only here for 2 days and we went to Kalambya in the Kitui District, around 3.5 hours from Nairobi. We left early in the morning and didn’t get back until after 9pm. It was to look at one of our new water projects but it was preceded by a 2 hour tour through a primary and secondary school. It was hot, dusty and I am sure we met everyone in the community. But, we had lots of fun along the way.

A day in the city in 26 degrees. I think they needed a coffee.

While we like to show people the touristy places we also like to show them another side of life in Kenya – where people live in poverty. We took Tee into the Kibera Slum where we were meant to take a food parcel to a needy family but their child ended up vomiting for hours and was rushed to hospital. Instead we visited some young men who are sponsored to attend school. Here we discovered that at one of their boarding schools they have to get up at 3.45am, every day! The boys were inquisitive about Tees tattoos, something happening more and more here. We also visited a school in Kibera where the little kids are so cute you want to take one home.

While you can go to some great places here, it is the people you meet who leave a lasting impression. There’s Mariam who gave us a Kenyan cooking lesson (Tee still doesn’t like ugali), Ayub and his family who came for dinner and Lucy who we took to dinner on our way back into Nairobi. Sure you can kiss a giraffe like Tee did (and who doesn’t!), feed a baby elephant or tour through a bead making factory. But it’s the incredible stories of joy and endurance that stay with you forever.

Tomorrow we take Tee to Nakuru with us to visit a school where we put down a deep bore well.  It’s only a few hours drive from here but we are staying overnight at someones house so the next day we get up at 6am to go to the national park. That afternoon we’re also out on a boat to see the animals from a water perspective. 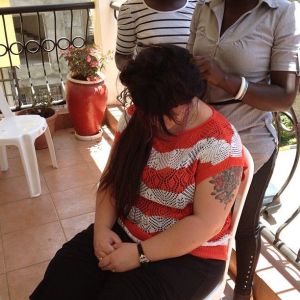 Both Tee and Pete are big coffee drinkers. They are about half the price of what Tee would pay in New Zealand so she’s happy to stop several times at the local coffee shop. This morning I had to steer her away from Dormans, which she has come to know really well.

However, I may have to take her there later for her caffeine fix!

Well, officially, we haven’t been married for 25 years until December 5th, but because we are leaving the country in a week we thought we’d renew our vows in front of our Aussie family.

We both cried in front of a crowd of 40 people, telling each other how much we cared and how grateful we are to God for how far we’ve come.

So, I thought I’d write something a little different this week and talk on commitment. It certainly hasn’t been an easy journey to get where we are, but one thing I’ve learnt is that without sticking in there, you won’t get great results.

Commitment is treated as a swear word in this day and age. It seems old fashioned, narrow and judgemental.

So, here’s a few pointers for keeping your relationship the best it can be:

When our girls were in their mid teens it was the same time as the hype of the High School Musical trilogy. Hannah still would love to marry Zac Efron, that I am sure of.

The song they used throughout all their movies was the one that had the line ‘we’re all in this together’. Besides the fact that it’s the type of song that annoyingly stays in your head, the lyrics are cheesily good:

As believers, we follow the God who gives us dreams, but we also need to be knitted into a community of faith, and we find our strength in that community. Like it or not, no man is an island, and the Church is here to stay.

For us moving to Kenya has not been something we can do on our own. We’re working extra long hours to make money for the extra costs of shipping gear and paying huge amounts on insurance. We’re having endless coffees and meals with friends to tell them what a worthy cause this is to invest into. Then there’s the visiting of friends churches, friends of friends and incidental meetings with strangers. We literally don’t make a move without consulting the communal calendar to fit everything in.

Some times it all gets a bit much and even though there’s eleven weeks to go there is no breathing space.

That’s why it’s good just to have a laugh with friends, watch a mindless movie (or the Olympics at this stage), drive out of town to catch up with people we haven’t seen for years, and eat chocolate!

While our whole family is all in this together, our larger family are too. That family extends across several parts of the world and we are thankful for their encouragement. All I can say is KEEP IT COMING!