I have been running pretty much my whole life. I remember my dad kicking all 4 of us kids out the door to go running with him. He died when I was 14 and I think it was part of the grieving process that I just kept it up.

Throughout high school I entered races on sports day but I was never THAT good, especially the sprints. Doesn’t help when you have the New Zealand champion at the same school. 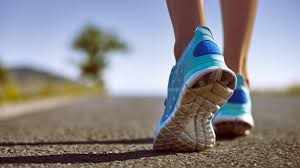 I think I like running because it’s just me and my headphones out there. It’s a great way to shake things off, especially if you’re in a grump or trying to work things through in your head.

I took a break when my husband and kids came along. We were youth workers and threw ourselves into that 110%. New Zealand winters are wickedly cold and there is no incentive to go skating on black ice when you’re running. That’s the bonus of living in Kenya, you never get great highs and lows in the weather.

When we moved to Sydney, Australia, we lived close to the beach. There is nothing like the smell of salt water mixed with fresh air. It’s quite magical down by the ocean. You can have a really crappy day but head down to the beach and it all melts away. Most mornings I would get out for a run and then a quick walk on the beach.

I also like running because I like food. I’m not a piggy, I just appreciate food. However, as you get older, shedding the weight becomes a major challenge. Running on sand as well as up and down stairs gives you great thigh muscles. But, nothing ever came off the waist. Science tells us that something like 80% of weight loss is from the food we eat and only 20% from exercise. I’m not disciplined enough to go super healthy.

We’ve been living in Kenya for 5 years now. For the last couple of years it feels like I’ve been more out than in because of international travel. Mostly it’s for family stuff but also fundraising. Overall this year I’m 6 months in Kenya and 6 months overseas, with me being away for 6 weeks at a time. 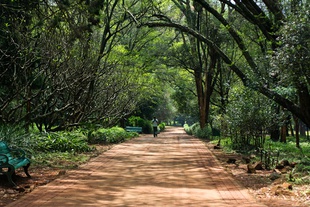 If only the place I went running was as good as this.

So I’ve decided for the rest of the year that I won’t go running. I’ve found it pretty impossible to go running when I’m on the road. Most of my friends who travel for work stay at hotels that have a gym. Me, I stay on people’s sofas or spare room. While I do find that going out for a run is a good way to get a lay of the land, I am the worst when it comes to directions. Also, because I move from one town to another after a few days and spend at least the first week trying to get over jetlag it’s near impossible to get into a routine.

Instead of running which I can’t sustain when I’m on the road, I’m power walking. It’s easier on the knees and it looks just as good as my ‘granny shuffle’. It doesn’t build as much muscle but I’m compensating by doing some exercises like situps and squats. So my ‘plan’ when I’m travelling is to at least walk three times a week for 30 minutes, which is what I do when I’m at home. At least that way I’m getting some form of exercise.

Will I ever go back to running? I hope so. I’ve finally found a better route that has less people walking on it and less potholes or a footpath. There’s no sewerage filled streams to run over and lots of trees. My running shoes are more than 5 years old so will pick up a spare pair I have in New Zealand and hopefully get back into it. I can’t see myself entering into any 15km ‘funruns’ but I can see myself enjoying the great outdoors. 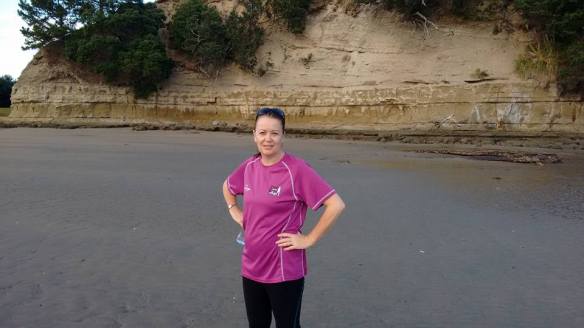 My typical running gear. This was in NZ when I tried walking on the beach as my exercise.

I’ll be 49 in a few months but I’m not going to let that nor my environment dictate my health to me. I hope to get back to running, I really do like it and at the same time I hate it because it’s such hard work. But then, I do like eating a lot!