The past week has been one of the longest for a very long time. We’d only been back from overseas for a couple of weeks when the opportunity came up to get into a cheaper apartment. It was just across the road from us and we will get to save about $300 per month. Sounds ideal right?

Well it should’ve been. How hard is it to pack, get the movers in and unpack again?

As with everything else in Kenya, it’s not that simple.

Five weeks ahead of schedule we signed the contract, handed over the money and started packing. We found a great company through some friends and prepared for the move.

How the flooring guys had left the kitchen.

In the more expensive apartments you have to paint the place before you leave it. The owner will hold back money until they are happy with it. It’s totally dodgy but that’s the way it is. Friends of ours were told by the owner that it would cost $850to paint the apartment, they got it done for just over $200.

Pete and I decided we would paint the place ourselves. It’s what we used to do in Australia and we had brought some of our gear back with us.

In the week leading up to the move pretty much all of our belongings were packed into boxes and stored in the lounge. We all slept on mattresses and prepared for the Monday move.

On the Wednesday before the move we met up with the landlady to collect the key. We get all the way there for her to tell us that the floors had not been varnished but it would be ready. We would pick up the key at the apartment on the Saturday. We go there to find the place full of dust and dirt, none of the repairs done and half the flooring pulled up.

We were livid as we had paid thousands of dollars and waited weeks to get in. It would be at least 4 more days before we could move in. But, our lease was up, we had to move out on the Monday and the movers were coming whether we were ready or not.

It didn’t seem a big deal to her that she wasn’t organised enough. We had no place to live and no where to put our stuff.

Yes, there was a lot of dust everywhere.

Sunday was spent letting the landlady know we weren’t impressed and that SHE needed to do something about it.

Monday morning comes. The movers arrive an hour early and are into it like nobody’s business. It’s easy for them, normally they would have to pack it all but we’d already done it. It wasn’t till that morning that we were told we could store our belongings into one of the bedrooms. It was only after several text messages and phone calls that we found out where we would be staying and for how long.

We ended up at the Classic Guesthouse. While it was only 10 minutes up the road we spent nearly an hour looking for the place because the landlady had given us the wrong directions (surprise, surprise). The staff told us that 2 nights had been paid for, the landlady said it was 3. For the first night it was okay. The second, that’s another whole story. 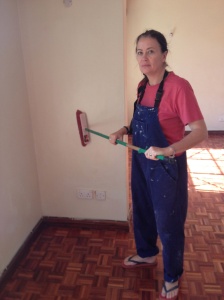 Me in action and obviously not happy.

On the Tuesday we spent the entire day painting our old apartment. We had a friend, Lencer, come in and she cleaned for 7 hours straight. None of us had lunch, we just kept moving. The place looked great, which is what we wanted to be able to get all of our bond back.

We heard absolutely nothing from the landlady that day. We still didn’t have a key, only the security guard did. We went to check it out and could see that only one coat had been put on the floors and all the crap of the flooring people was all over the place. There was dust and dirt still everywhere. And there was no electricity.

Here, it’s the landlords responsibility to make sure the place is ready to go, including the power.

That night none of us slept much. We still didn’t know when we could go to the apartment, we had to spend money eating out that we hadn’t budgeted for and we still had to catch up with the old landlord to see what money we would get back. The walls at the guesthouse are paper thin. That night people were happy to bang every door in the place and there was a couple who decided it was party night.

We decided no matter what we decided we would move into our apartment that day. We packed our bags after breakfast, sent Liz off to work and went to the apartment. It was in an absolute mess.

Pete went off his tree at the landlord and we finally got some things happening. The flooring guys came back to clean up their mess. We got Lencer back to help us clean and then the landlady rocked on up with her househelp. Mind you she wasn’t apologetic at all.

Pete and I ended up taking 2.5 hours just to clean the walls of the lounge and dining area. First we had to sweep the dust off the walls and then wash everything away.

6 hours later we were finished. Well, not really because there are lots of boxes to unpack, but at least we were in.

We’ve pretty much moved house every 2 years. Of all the moves this would’ve been the worst, all because one person, just one, couldn’t be bothered doing her job.

Here’s hoping we don’t have to move for a very, very long time. 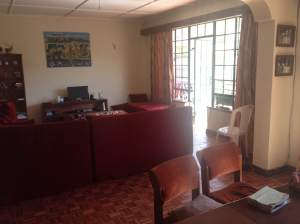 Not quite finished but we’re getting there.