The online world of social media is a one sided, glimpse of a moment kind of thing. None of us want to put the real us out there, just the smiley, it’s all awesome picture.

So I thought I’d share what goes on behind the scenes to get what people see about us and the work we do. 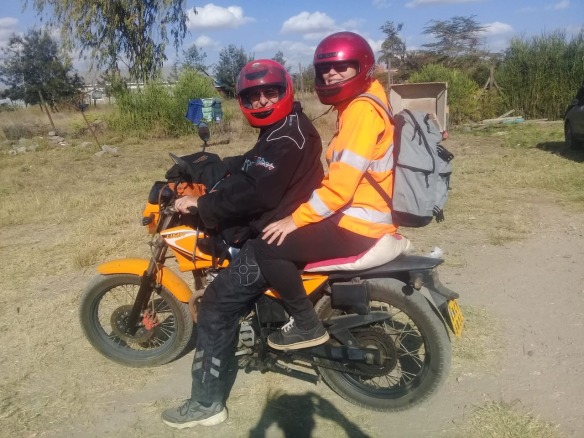 Actually this was one of the many frustrating moments in Kenya. The mechanic had promised to have our car repaired by the Thursday as we had planned out of town trips to do project work.  And of course, he didn’t deliver on time. In fact, it wasn’t ready to get picked up until the Monday.

Hence, we had to take our motorbike out to Isinya, which is a 90 minute ride. Doesn’t sound like much but the seat is harder than concrete. Mix that with lots of potholes, huge speed humps and crazy drivers. I had to get off twice each way just to stretch my legs and butt. While we are smiling, I never want to get on that bike again – but of course, I’ll have to. 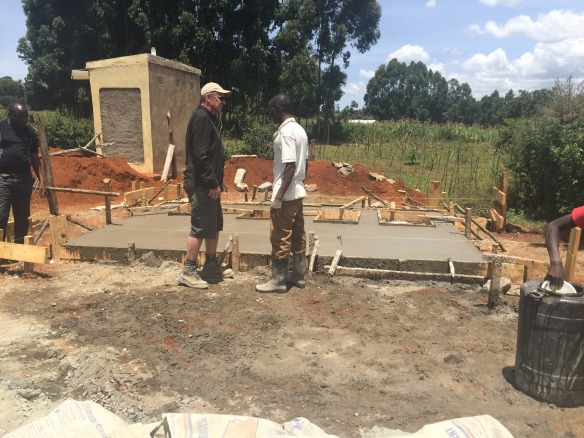 What people see is the nice finish of the first stage of a block of toilets. What they don’t see is the 4 days of Pete and Lucian trying to communicate with a non-English speaking team led by a guy who didn’t want to build the way we wanted. In fact, the labourers refused to unload a truckload of building material because they didn’t get paid extra. Hello, aren’t you getting paid by the day no matter what you do???

I hate being in front of the camera but do so occasionally because we need it for our newsletter. What you don’t see is me with a frozen shoulder which aches 24/7 and especially when I’m trying to sleep, but can’t. Of course, we’ve always got to be smiling! Actually this was on a really bright day and I was dreading jumping on the motorbike for a trip home. We’ve been working non stop for weeks without a break but committed to the weekend of meetings for our friends. I don’t regret it, but knowing we haven’t had a day off for over 2 months is a bit much for my brain.

Nothing gets raving reviews like a photo with kiddies. This one was done at a primary school in Kenya. What you don’t see is the little autistic boy in the green sweatshirt who kept running his greasy and dirty hands through my hair. And of course, we were staying at a place where it had a run around shower so couldn’t wash my hair – and I left the dry shampoo at home in Nairobi. He came alive when I brought my phone out, which meant it too was covered in goodness know what.

Here’s a nice photo of Alice, our Kiwi visitor with Scholar and her mum. When people see a photo like this, they usually go ‘oh that’s nice’. What they don’t see is the team walking through a slum area literally over a rubbish heap, with people shouting for the items we’re carrying in bags ‘You should give me the sugar’, going through alleyways not much wider than your body, having to watch you don’t whack your head on a sheet of metal. What you also don’t see is the hours young Scholar has put into preparing a meal for the four of us in her 3 by 3 metre home. Or meeting her mum who is super quiet because she thinks her English isn’t acceptable.

Tonya is a doctor who lives in a very remote area of Kenya. We see this awesome photo and go ‘Oh, so cute’. What we don’t understand that Tonya has been awake straight for 38 hours. She doesn’t get a day off unless she is away from the clinic. Her friend Linda who runs in a school in a Masai area, are the only white people in the area. They have lived for 10 years without electricity, running water and some of the most unreliable internet in the country. It is only this year that they had an x-ray machine. We don’t see the hardship, the times they’ve been robbed at gunpoint nor the loneliness that comes with being on the mission field.

Every photo has a story, both good and bad. However somehow in our minds we take that moment and don’t realise that there is so much more to the situation. We don’t understand the hours, the sacrifice, the loss, the struggle with mental health, the days when you want to be invisible.

Let’s just be careful to remember there is more to a person than what we see online. They have feelings, bad and awesome days.

Don’t judge your life by the snapshot, but by the movie.