What is a child worth – a million dollars, a billion, a trillion?

I don’t think you can put a dollar value on the life of any person, let alone a child. Over the last year Pete and I have been working on a unique situation which couldn’t be told until he had left the country.

Early last year I was teaching a small group of boys at a residential rehabilitation farm about an hour out of Nairobi. Pete goes there a couple of times a week to help out the practical side of things. I was teaching an English class.

Basically what happened is that the father of one of the teenagers appeared as he found out his son was in the program. Many years before he had been granted refugee status in Australia and he had just returned to his homeland and stopped through Kenya on his way back. He found out his son was alive so came for a visit.

What proceeded for the next year was this father working with us to get his son to be reunited with him. It’s a very long and laborious process but we all held our breaths at every roadmark waiting to see if he would pass the test.

It’s certainly not as easy as one would think.

There’s the court case to make sure no human trafficking is taking place. You have to prove that this 14 year old actually belongs to both parents. He has to get a birth certificate, no easy feat in Kenya. 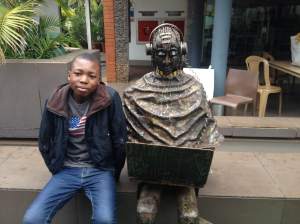 Many of the places we went to he had never visited.

One of the first tests is a biometric one. It’s a flash name for fingerprinting but you have to go to an assigned testing station.

Then there’s the mandatory health tests for TB, HIV/AIDS and a full health check. It takes about an hour to get there and you have to book out 2 full days.

Before each test we have to feed the young man and his mother, it will be the only meal they will have that day because they don’t have much money to get by.

The dad has to get a form couriered by DHL because he’s told that it has to be an original form and not a scanned one. I meet with the mother to get her signature. She travels about an hour for a 5 minute meeting. I then call the Australian High Commission about dropping it off and the lady says ‘you can always just scan it and email it through’. I dare not tell the dad that he didn’t need to pay the $60 to courier the A4 paper through after all.

It was only 2 days later we got the news that Sam (not his real name) had been given an all pass visa to move to Australia. We were so relieved, he finally could go to his new home.

But it isn’t that simple.

Imagine, this kid has never lived anywhere but Nairobi. He hasn’t finished primary school and the only aeroplane he has seen is in the sky. In Kenya not just anyone can enter the airport terminal, only those with a ticket. Sam would not have a clue of what to do or where to go. He’s intelligent but it would be way overwhelming when it comes to travelling.

So, we go and book his flight and at the same time. I will be travelling part way with Sam – only to Dubai. From there he will become Emirate Airlines VIP. 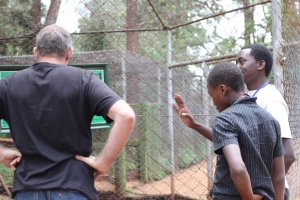 A tour of the animal orphanage to see a lion close up.

After this I realized that this kid has never seen real wild animals. It’s a sad state but many children in Kenya haven’t simply because they don’t have the money for it. After chatting with his dad, we were given permission to take him to some animal game parks. One week we took Sam to see the baby elephants and then to the giraffe centre. The next week he got to stay overnight with us and at 6am the next day we spent hours driving through the Nairobi National Park. We couldn’t spot the lions so ended up going next door to the animal orphanage where there are caged lions who cannot be released back into the wild. At least he could see them in the flesh. 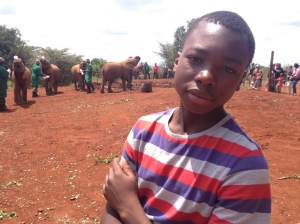 Very difficult to get a smile out of this kid!

Often in poor families the kids all share the clothes. Whenever we have seen Sam we see him in different shoes and clothes, which often don’t fit properly. Today we take him to get two sets of clothes, brand new ones. That way, when he gets to cold Australia he won’t freeze too much (we hope).

I have to mention Sam’s parents. Both of them are brave and committed to this huge step for their son. It is difficult for any mother to release her child to someone on the other side of the world. She doesn’t have access to the internet. She doesn’t have a post office box (no mail boxes here). The likelihood of him calling her is very small. She won’t see him for years.

The father has spent A LOT of money not only for a ticket but all of the expenses involved in the process. He also has a new family in Australia he is providing for. The easy road would’ve been to forget his son or send money every now and then to the mother. Instead he chose to go on this long journey which never had any guarantee of success.

But they have hope and vision. They believe BIG things for themselves.

For this kid, the world is now his oyster. The possibilities for Sam are endless and we look forward when we return to Australia next year to see how he has blossomed.

He has a new home, bedroom and family waiting for him. He will go into high school. He will achieve his goal of going roller blading.

He will do well.

It has been an honour for us to be involved in this year long process and wouldn’t have swapped it for anything.

It’s been worth it because Sam is worthy.