In October last year Pete, Liz and I left our home, our family and friends and our youngest daughter to move to Nairobi, Kenya.

Note that I said moved and not just to visit.

There is a huge difference from going somewhere for a couple of months each year to actually packing up and relocating. Sure, people will put up with your habits, idiosyncrasies and weird ways of doing things. Give it 6 months and they may want to quit before you do!

There are days when it is really satisfying, especially when you can help one of the local leaders do their job better, or when a teenager who never talks to you comes up and says ‘Thanks, keep on doing what you’re doing, it’s great’. Other days suck to the max.

You get over every second guy on the street yelling out ‘Muzungu’ (yes I do actually know that I’m white but thanks for pointing it out anyway). Or the traffic is so bad it makes you want to beg the next driver to do you a favour and run you over. Or you just want to be with old friends but know that YOU’VE made the choice to leave them.

Moving country, especially to a developing one, is not for the faint hearted. I think I’ve discovered more about myself than anything else in the 7 months we’ve been in Kenya. I don’t always like what I see, but I hope it’s a passing phase.

Sometimes we just want to escape Nairobi and get away from it all. We do that by going to look at potential water projects out of town. That may mean driving to another country but it’s worth it. Personally, I’m looking forward to going to Tanzania later in the year. It’s only about a 5 hour drive (okay, add another hour at the border) but that’s nothing. We’ve a number of friends there doing stuff like schools and training programs and I think I’m going to enjoy just being with them for a few days.

While you can’t always escape a situation, you can always do something really out there. For me, it means having a latte. Sure, you can mock, but I’ve never been into coffee so to go and actually pay for one and drink it is a huge thing. Pete and I have found it a way of doing cheap therapy. Mind you, there’s this really nice gluten free brownie that is phenomenal.

Amongst it all, I am truly grateful for what we have right now. We have electricity, which is a bonus, especially since it’s been off for most of the last 3 days. Today, we got curtains for two of the bedrooms. It’s got to beat having a blanket up there. Last week, a very generous business offered us the funds for a car – that is absolutely huge. I love it when I get Facebook messages, text messages or emails from people to let me know they haven’t forgotten we exist.

Thankfulness is a real key to being in a place like Africa. You get to rejoice in the little things – like having access to a flushing toilet or a car that someone lends you. But it’s also being thankful when things don’t go your way. The Bible says to give thanks IN everything, not necessarily for it. I’m not overjoyed when I know that some of the kids in the child sponsorship program are struggling with alcoholic parents, aren’t making it in school or may be married off in their mid teens. But I am thankful that they can actually go to school and get a chance to make their future different.

So, I can sit and whinge that there’s no electricity to cook Pete a nice roast meal, or I can get over myself and get the gas going and put it in a frying pan. 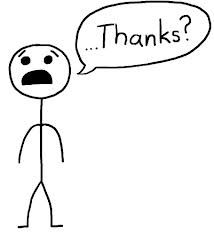 Yes, this is sometimes us.

1 thought on “Thank you, thank you very much (Elvis)”