There are many ancient religions where children were sacrificed on behalf of their parents. These include the Incas, Moabites, Phoenicians and Islamists.

Usually it was to appease a god, please them or in the hope of better crops.

Even today child sacrifice continues around the globe. ‘There are many indicators that politicians and politically connected wealthy businessmen are involved in sacrificing children which has become a commercial enterprise.’ (Wikipedia)

What made me think of this gruesome event was when our daughter stomped off to her bedroom last night yelling ‘that’s it, I’m packing my bags and getting the next flight home!”

While it may not mean a lot to the average person to us it was a huge thing. Because we had decided to move to Kenya our youngest moved out of home and then moved country to New Zealand where she hadn’t lived for 11 years. Our oldest (Liz) came with us.

Literally she had no choice. Liz is a special needs young adult and cannot live by herself. She is a high functioning Aspergers. Most people don’t even know because she is so friendly, has the best smile, cooks wonderfully and is adventurous. Liz has no worries about jumping on a plane to travel from Kenya to Australia, as long as she has her paperwork printed out and in order. If you ask her how her day was, her answer will always be ‘good’.

So for her to say what she did really hit hard.

People think it’s ‘so wonderful’ what we are doing (working in Africa) but there is a flip side to it that most don’t even think of.

Our kids sacrifice for us to be here.

There are days when you wonder if that sacrifice is really worth it. They have to give up friends, family, jobs and the convenience of the only life they’ve known. There is a huge difference between visiting somewhere and living there.

For Liz she has totally lost her friendship and support network and doesn’t have the ability to rebuild that. There are no great social services for those with a disability here. Getting to a church event during the week is a 90 minute drive each way – and that’s on a good day. Art classes are exorbitantly expensive. Volunteer positions for her are just about zero. Then, there’s the fact that she has to fly back to Australia every 3 months to keep her disability pension.

As parents we really do feel we have sacrificed our kids for this mission.

It happens around the globe time and time again. It’s an extra thing when you have a child with a disability because their future doesn’t look quite as bright as it did before.

We now have to make a decision to whether she stays here or has to return to New Zealand and see her only every few years. Right now the thought of that is too much to bear. 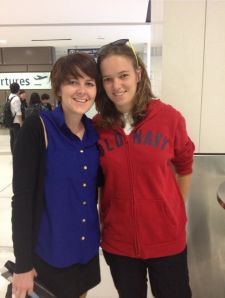 So when you hear of people working in developing countries take a moment to think about how it impacts their family both for the good and bad. There are those working for a large NGO that cater for their housing, transport and kids schooling, then there are small development workers like us who scrape by on their friends donations. Either way, at some stage they either have to return to their home country for their children’s education or they have to say goodbye to them, unsure of when/if they will see them again.

Skype and social networks never replace a real relationship, but it sure beats the old days before they were invented.

Our kids have been blessed to be involved in humanitarian work in several countries, seen many places in the world that others only read about and have had an impact in changing communities. I believe it has changed them and made them better and bigger minded people. I don’t regret investing in them to travel, it has been worth every dollar spent.